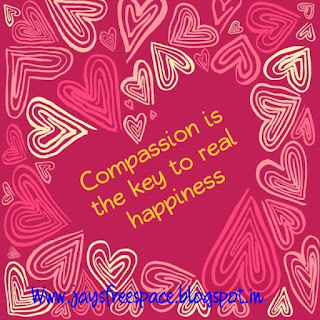 There have been days when being compassionate did not make sense to me. I have complained all day, restlessly! It just made me feel much better for that moment, like in heaven, like all my problems just dissolved.
Again, when something else happened, I would complain endlessly and get back to that comfort zone. My mom has been the only person who took it all and let me be. Gradually, my mom became my solace because she said exactly what I needed at that moment and that gave me peace. There were times she reminded me about letting go and doing what I must, I hardly listened.
At times, she would just stare me in the face and say “Enough is Enough”. I hardly understood and took her as my target. There have been many times she has faced my deep agony in spite of her busy schedules. I have then felt miserable and have told her that she is not being there for me.
This continued for a while. I was slowly building a wall and venting it to myself Seeing this, my mother sat me down and spoke with me. She asked me to explain what troubled me.
I hissed like a snake! I told her that I was perfectly fine. It’s she who had problems listening. My mother, the brave-heart that she is, did not mind the comments then. She had set her mind to talk to me, to listen. It took me a while to open up, with the fear of being abandoned again. However, I chose to say.
I said I felt miserable about everything that happened around me. In general, I did not like life much. She just asked me once, “What if I had complained about the same thing for almost two weeks? Would you have listened?”
I immediately replied, “Mad or What? If it troubles you so much just resolve it and move on or just let it go. Maybe you just didn’t do anything with your life yet!” My mother just smiled because she never expected such a quick answer from me even in so much agony. Neither did she term me selfish. She just said, “Here you go!”
When she explained why she listened to me initially, that question on my mind for so long was answered. She really thought something troubled me, but when she realized I was using her as a dump bin, she just shut me down after many warnings which I clearly did not see.
My mom just told me one thing! Forget the world, forget even us, Start with yourself. Be Compassionate. I am not expecting anything else from you! I couldn’t make much of it at that moment, but I knew it brought some kind of peace that made me silent for quite sometime.
It took me many months to realize what it meant! One fine morning, when my mother was helplessly looking at her mobile, I asked her what had happened! She wasn’t sure how WhatsApp worked, but if she knew she could use it well for her business. I just took it as my chance to help her with that rather than make her feel annoyed that she did not know it.
She taught me compassion, I learnt it that day as I sat near her. I took the time to explain how it works in such a detailed mode that she asked me doubts without hesitation!
#Life is after all those little moments that change the way we look at everything within us!
Linking post for #QuotedStories with Upasna!

6 Comments on “If Not for Compassion…”