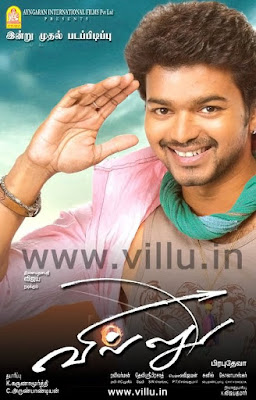 Vijay’s next movie VILLU is in the first phase of shooting. OOPS just a reminder. This title seems seems similar to S.J.Surya’s VIL but this movie is named VILLU! Vijay and prabu deva have teamed-up again to give another bang to the kolly-wood industry. As of the first phase shooting some stunt scenes were taken in karaikudi. Well itz time for the story now!

Vijay is nurtured in a small village by his parents, his father being a sincere officer and his mother as a usual caring and affectionate world’s best mother. At some point of time the sincere officer is murdered in a brutal plot by three evil-doers. The mother and the son fortunately escape. After Vijay grows up in the village he happens to meet his father’s friend. He unveils details to vijay about his father’s murder. Vijay plans a plot for one guy and carries out that paln successfully, Vijay leaves the village to kill the other two cads responsible for his dad’s murder. One of the two ruffians happens to be nayantara’s dad. Obviously by this time vijay is in love with nayan. The suspense of the movie is

“Will Vijay kill the ruffian who killed his dad?” “What happens after nayan comes to know about vijay’s notion of coming there?”
Is it gonna be a treat like pokkiri?? Have to wait and watch!

Bottom Line:
After a long time battle with trisha, nayan has teamed up with Vijay! Lets see if this pair make the magic prevail among the audience! Many stories are out with the concept of revenge lately. WHAT MATTERS MORE IS THE WAY THE MOVIE IS PICTURIZED! At the end it has to be a movie worth being watched in the theatre at least once! Hope this Diwali is gonna be a great time for the VILLU team!