Applying mehndi or henna paste is something that most of them like. I am one among those who loves to see that my hands are crafted by my sister with beautiful designs. Applying mehndi is something that women of the indian peninsula and middle east regions like, as it is a cosmetic that beautify their hands and feet with intricate designs. right from my childhood I have loved to see the deep red or almost black shade sticking to my hand after washing off the dried past. It gives me some kind of nice feeling. Proud feeling of being a girl! My cousins and I have always believed about the goodness of mehndi. You have to think of a person before applying the mehndi,after you wash it off if the shade is deep red, it signifies that you love that person sincerely and deeply! Isnt this nice?? Apply it and you’ll know!! 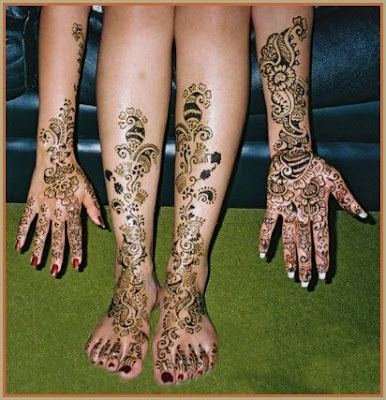 Other than usually applying the mehndi on the hands and feet it can also applied as tatoos in the upper arms and neck and even at the back of your body. It is better than the usual painful tatoos and one can keep changing designs every two weeks. Other than beautifying our hand and other parts it is also used for medicinal purposes. It is widely used by both men and women all over the world. Henna is also used on hair as a conditioner as well as a dye. It is also used by men on their hair and facial hair as a dye. In the western countries it is mainly used as a hair dye. Egyptian mummies have been found with hennaed nails. The henna plant has been referred to as the ‘Cypress of Egypt’. Hebrews called it ‘camphire’. Henna is glorified in ‘The Song of Solomon’ – “My beloved is unto me as a cluster of camphire in the vineyards of Engedi”. 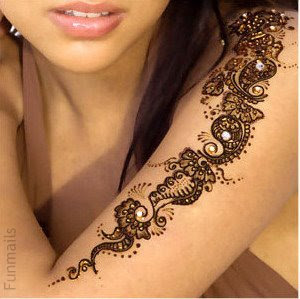 It is considered an anti-irritant, a deodorant and an antiseptic. It is used by Ayurvedic physicians for the treatment of heat rashes and skin allergies and to cool the body against the intense heat of summers. Because of it’s cooling property henna leaves and flowers are made into lotions and ointments to be used externally for boils, burns and skin inflammations, including sores from leprosy.
Sleeping on a pillow stuffed with henna flowers is considered to have a soporific effect on patients suffering from sleeplessness.

In many parts of India, henna is part and parcel of a woman’s life especially during festivals and weddings. The role of henna goes much beyond cosmetic and aesthetic value. Henna has a deeper meaning to the women of India.The night before a wedding is known as the ‘Night of Henna (Mehendi)’ when the bride’s hands and feet are decorated in elaborate floral and fertility designs

On the henna night, relatives and friends (married as well as unmarried) of the bride gather at the bride’s house. While henna is being applied the bride is enlightened about the mysteries of married life. Many a folks songs are woven around henna nights signifying the departure of the bride to her husband’s house and thus beginning an important stage of woman’s life. 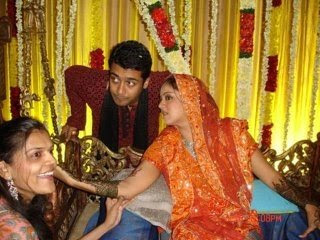 There are many stories about the longevity of henna on the bride’s hand. It is said that if the henna lasts longer on the bride’s hands it indicates that the bride is treated well at her in-laws’ place, sparing her from the household chores, at least on the first few days of her married life. The bride’s mother feels a sense of relief when the daughter visits her few days after the wedding and still able to see the henna design on her daughter’s palm.In some regions of India henna paste is also used to stain the bridegroom’s palms. Because the deep red left on the skin when the dried past is washed off is the colour that symbolises the deep love between the husband and wife.

To obtain a maximum black hue a dry lemon is boiled in the water used to make henna paste as it’s acidity makes the dye fast and because the tint becomes blacker from the colour released by the lime. After 3-4 days the black colour fades into an auburn hue lasting for approximately 10 days and in turn fading to a light orange tome. Rarely do women let the colour reach this stage and most apply fresh henna along the same lines of design of the first decoration, unless a different decorative style is desired. In the latter case women wait till the dye has completely faded.

Traditionally henna leaves were crushed finely, sieved in a fine cloth and then the past is applied with the help of a matchstick. Now a day’s henna powder is available in the market in a packed form. Plastic cones are devised for easy application. The cone has a fine opening at the thin end which lets a thin flow of past to facilitate intricate designing. One can also get plastic cones filled with henna past ready to be used

Henna painting has become very popular as a form of temporary tattoo and is liked by one and all. One of the main advantages of Henna painting is that the designs gradually fade from the body over a period of about two weeks. Henna is a beautiful and painless alternative to tattoos. 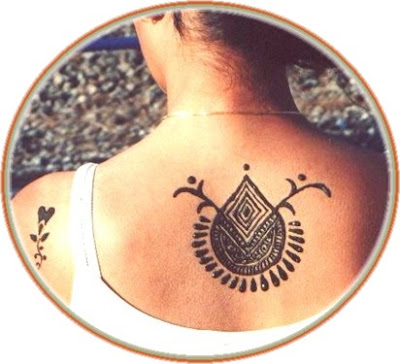