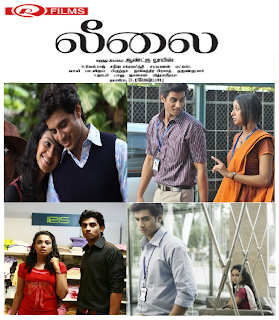 A breezy love story with a fresh pair.
The tom and jerry fights work well when it comes to a story on relationships always, in real or reel.
The bold and beautiful Manasi Parekh as Karunai Malar and neatly dressed Shiv Pandit as Karthik have a good screen presence.
The friends of the lead pair Santhanam as Vicky and Suhasini as Suja have notable roles too.
Debutant Andrew Louis has worked well on the script and dialogues.
Satish Chakravarthy’s music works, for the songs were in town way too long but still makes us hum to the tune(only Jillendru oru kalavaram) while watching.
Breezy
Cheesy
Yet another love story.