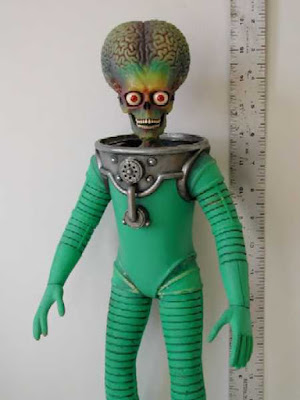 President James Dale of the United States and his right-hand man, Jerry Ross discover that an army of Martian UFOs are hovering around the Earth, and everyone has a different response. Some, like Texan alcohol dealer Art Land and slimy nesman Jason Black, just want to make a profit out of it. Others, such as TV hostess Nathalie Lake, Land’s spiritualist wife Barbara, and the Southern-like Norris family, are excited, and some, like Dale’s wife, Marsha, and daughter, Taffy, don’t care. Richie Norris is extremely intelligent but is only respected by his insane grandmother, while his older brother Billy is favored for joining the army. General Decker doesn’t trust the Martians and insist they fight, but General Casey is more optimistic. The Martians appear to come in peace but suddenly begin to use their super-powerful and technologically advanced weapons to wipe out the population and great structures. Soon, they attack Las Vegas, where the Norrises are living, where former heavyweight champion Byron Williams is visiting, where an obnoxious lawyer is gambling, and where Tom Jones is performing in concerts.

The Review:- (I had to stop laughing to write this piece of poetry!!)

Guys you will not believe that this quack of a movie has Pierce Brosnan – THE EX BOND – James Bond. To add to the humour, his head is separated from his body and is left dangling next to the SEX and The CITY star – Sarah Jessica Parker.

That too she has a body of a chihuahua.

Cutting to the chase( Read the plot for intermittent details)

In the climax A grandson finds from his granny that the best way to eradicate or rather exterminate this alien menace is by playing some operaish (please pardon the PUN) music that sounds like Beethoven on a barbecue!!

What a relief when the movie gets over. This Sci fi is for those who relish Tim Burton’s satirical comedy.

This movie has legends who are worshipped nowadays. 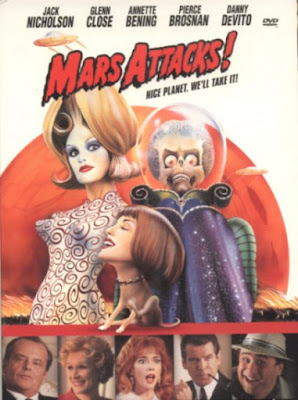 To be frank this movie is for your kids who are being introduced to the Sci fi genre (LOL).

Make sure they have pop corn. Cause the popping sound could actually give them a feeling of gunning down a martian!!

I rate it the numero uno in sci fis’.

Steven Spielberg be ashamed of yourself!!!! 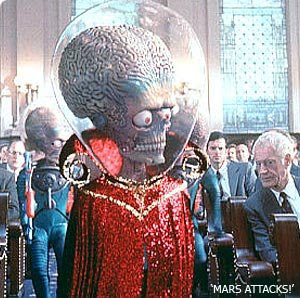