Skip to content
A memoir of how a stray pet can change you! Jhansi made me a better person. She taught me compassion! 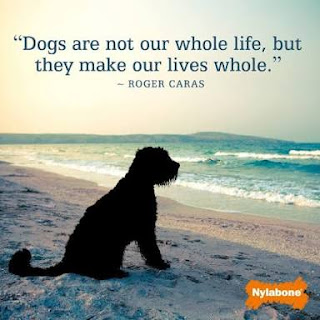 The cute 3-month old Rajapalayam cross stray had found it’s way to our home. This is the second female pet that came from nowhere and loved our home. Somehow my mother and I found her to be so cute that we had no intentions of sending her to Blue Cross. However, my father, sister and grandmother weren’t ready to have another pet at home.

We were worried about sending her away. I knew my dad would require my help to take her back, so I thought I would convince him and made plans. That’s when the rains started in Chennai. We were heavily flooded after a decade. Somehow Joy looked upon her as his rival. He made sure she never entered the hall. She was such a sweetheart to accept her first cardboard box home and stayed quietly. She never bothered about the rain, nor did she whine and complain. She was totally at peace that she had found a home and she was being fed regularly.

She enjoyed the rains like us and walked up and down in the water 1000 times a day. Mind you, Joy doesn’t like water and cannot even be pushed into it by mistake. While this little one shivered our hearts ached and we gave her blankets and made another cardboard box home. Who do you think made the home this time??

Yes, he totally loved her. He saw the strength this little one had and how playful she was. How much she loved all of us is something that makes me cry even now. Dad wanted to leave her at Blue Cross after the rains. My sister also loved this cutie and I became totally attached with her. She used to come with us when we walk to nearby shops or even to shops two streets away. She was the pet we always wanted. My sister loved her and slowly took our side. During the rains, my sister and I started finding names for this little one. We settled on 3 final names. Jhansi, Gypsy and Kutty.

The way she faced the rains with pure courage made us choose Jhansi. She was our Queen Jhansi. As a family we decided to have her with us till the rains. That year  the rains were so severe that even Blue Cross had to renovate its own place. Many animals had to be saved and kept safe in make to do homes temporarily. Jhansi isn’t the quiet type. She is down right naughty.

The size of the dog never bothered her. She played with every dog in our street and it was like almost everyone were her friends. Every dog treated her as the little one and she used to push them down and play and trust me, those dogs obliged. One fine  she went to a neighbor’s house and mistakenly fell into the well. She was rescued after that Uncle heard her wails. My mother got a call from that Uncle asking her if the dog was theirs. Once she said yes, they had left her on the road and followed her. She came shivering and her eyes were so dull, but trust me she walked all the way home and without wailing she went to her bed. We were only glad she was safe. We let her sleep in her bed near our entrance. She had always wanted to come inside, but Joy never let her in.

I used to call her inside and her eyes would glow. She used to step in and there came the watchman who would bark like complaining to my mother. She used to go out and stayed in her bed. We used to have two plates and two bowls for each of them. However, Joy always ate what was kept for Jhansi and she did the same. We used to laugh at how these dogs behave even though it’s the same food in both plates. It used to be so much fun with both of them. Though they behaved like enemies in front of us, these two play together when they feel we aren’t watching. I wonder if Joy thinks we will leave him out if he becomes old or something. Is that why he doesn’t leave younger dogs in? It’s a question that’s on my mind then, but now I understood its plain domination. Like the first child in the home who isn’t sure what will happen if a second child comes, but understands later that love has grown and not lessened.

Many people were already eating our heads asking if we had neutered Jhansi. She was hardly 4 to 5 months. I sat down and researched about female dogs and understood that they like us must get their puberty to conceive. It usually happens after 7 months or so. Two people constantly tormented us about neutering the dog early. We were upset and gradually lessened our talks with them for this very reason. Jhansi survived two major incidents in her life. The rains and the rescue from the well. We were so glad.

It all changed in the month of January. Jhansi usually roamed out, played with all, we had a tag for her so the Chennai Corporation guys didn’t take her like they usually do with the other street dogs. One fine day, when she wanted to go out, I managed to change her mind and kept her inside against her will. She managed to please me for sometime and then went and stood near the gate asking me to open it for her. I obliged. That’s the last I saw her. One of the neighbors (one of the two ladies I had told earlier) informed the corporation guys to take her away before we knew it. She informed us later that she had asked them to neuter her and leave her back here. The shock we went through was miserable. I was almost ready for a fight, but my mother insisted being silent. I was in complete rage and felt how humans can be so outrageous. If she had conceived she would deliver her pets at my place not at someone else’s, right? What’s  in for her, I thought! I waited for Jhansi to come back. I waited a whole week which turned into two before she came. I went to receive her.

The bus had other dogs. I couldn’t see Jhansi first. The scared faces of the other two dogs scared me more. I wasn’t sure if Jhansi was in or not. When she got down, I was only glad she was back. However, she hardly jumped with joy, she felt cheated. I was heartbroken. I just hugged her and carried her back home. After a couple of days, I gave her a bath, but she wasn’t still convinced. She looked away and did not bother to come close to me. It was as if she was thinking something and felt bad about that thought. 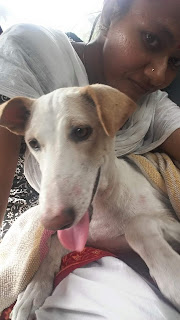 I couldn’t reach her like before. Her health declined. My family was equally worried about her health. Dad and I took her to the vet and asked about her condition. The vet said she had acquired Distemper from other unvaccinated pets at the corporation warehouse. This is contagious via inhalation. He  explained why he wouldn’t be able to save her. I was shocked to know this. I googled to know about Canine Distemper and tried my best to keep my mind out of counting her last days. It wasn’t easy. There was no way to save a dog less than a year old from canine distemper. I had seen every video available on YouTube about how the owners of pets had saved their pets from distemper. I fed her carrot juice, meat soups and everything I learnt about. Her eyes told it. Her nose and footpads became rough. These were some of the symptoms of Canine Distemper. The last stage is the worst.

I was not able to think about my wedding which was just 4 months away. I spent day and night with Jhansi. I wanted to save her. We requested her to come into our house. She never came. Slowly, her walks reduced. She fell frequently. Neurological problems started to show up. She managed not to pee on her bed until 3 days before her death. I used to carry her from wherever she fell. It was not disturbing for me to see her like this, but truly saddening. She loved me and I knew it from her eyes. I couldn’t see her go. I couldn’t let her die. There have been moments, I have pushed myself away from her because I couldn’t see her go. Some of my well-wishers said I might acquire this and it would become trouble during my marriage. I never bothered. I still regret not vaccinating her as soon as I found her. Instead I wasted my time in making the decision. Whether I want to adopt or not, the vaccine helps.

My dad was the first to see her in the morning and he shed tears. He had planned the next steps too. When I woke up and saw him upset, I want to ask the obvious. I couldn’t stop crying. Ants covered her nose and it was the most obvious sign. She was lying peacefully. She had suffered a lot. One thing I am happy about is finding a burial ground for pets available near the place I live. My father took the initiative to take her safely wrapped in a blanket and he did the last rites for her before burying her. We still think about her and thank her for spending her time with us. 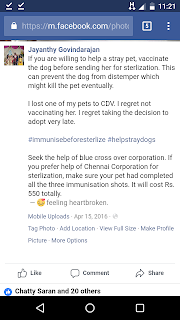